This time we have a Honda CB500X from 2019. The test lasted 7 days and I also had a fairly comprehensive opportunity to test it. Is this really an Adventure motorcycle as it is classified on Honda's website? Or rather a city motorcycle with a 19inch wheel in front? The answer below!

How does the CB500X work in route

Traditionally, I took the S8 route towards Bialystok and after a while after Wolomin turn to Stanislawow. Then return to Warsaw. Such a small circle plus a little bit on the spot for about 200 km in total, which allowed me to check how comfortable this motorcycle is both on the highway, villages and light terrain.

The wind shield is very good in my opinion, the windshield is noticeably higher and better attenuates gusts of air than in the NC750X I would rather compare it to the one you have in Honda Africa Twin. Look for yourself, I will remind you that I have 190 cm. 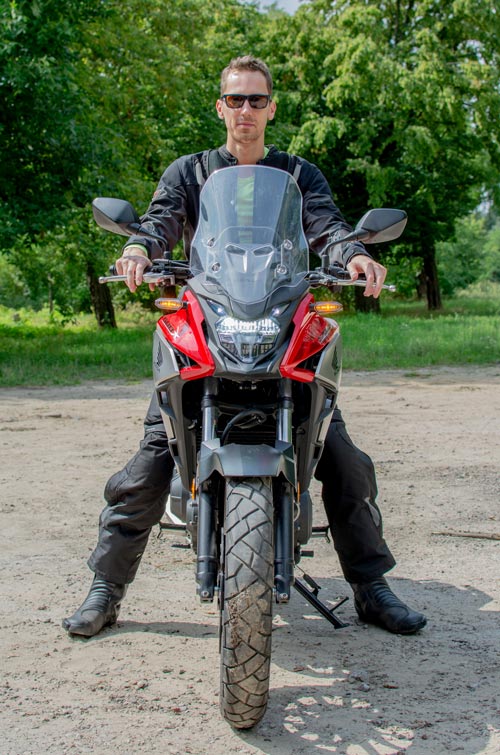 Maybe not quite related to how a motorcycle works on the road, but it's worth mentioning in the picture above.

We have full LED lighting here, without any surcharges - so here's a note to the previously tested BMW F750GS, you can make a motorcycle for less than 30 thousand with LEDs.

They shine very well, super illuminate the road itself is also at the highest level. I like the direction indicators very much, the narrow, sharply cut, which are apparently inspired by those from the Honda Africa Twin and I hope the new NC750X will get one too.

The Emergency Brake Alert System on the CB500X helps to ensure the safety of the driver in the event of an emergency brake application. The system detects sudden braking and automatically activates the front and rear warning lights, warning other vehicles in the vicinity.

I tried to fire it by sudden and quite strong braking at least in my opinion, but I did not succeed. You can see, however, I am afraid to pull the brake lever hard enough. 😅 I also take my word for it, that the system is and will work if necessary.

Is it comfortable? The position is similar, you sit upright because the steering wheel is high, thanks to the brackets on which it is mounted.

The angle of the knee deflection is pleasant in this respect there is nothing to attach to. However, here, depending on your taste, the angle of the legs is smaller than in the NCK, really moving from one motorcycle to another you can feel the difference in weight. A motorcycle is simply narrower, lighter.

At first when I sat on it I thought it was softer, but after 2-3 hours of driving my ass also starts to hurt. Just as much as the fuel tank allows to straighten the bones. Not like in NCK because of the different shape of the couch but it is not the most comfortable one. There is no drama because it is not quite a hard board.

Watch the photo of what it would look like if you were riding with a passenger my posture, there is no need to hide a motorcycle to ride with a backpack in my opinion is not suitable.

What about this route?

More than 130km/ it starts getting nervous. I didn't feel confident, the side blasts are clearly showing signs, here the NC750X wins, that construction is more stable for me. The motorcycle has a low weight and is narrow, high position.

We don't have much power either. But up to these 130 are really fine. I haven't had a chance to check it loaded with even a central trunk, but I suspect it will be as comfortable as possible for 1 person for a few days' trip.

What works in favor of this motorcycle is the fact that fully refueled weighs about 200 kg! Let's compare it to the NC750X almost 20 kg more and the DCT box 30 kg more. Similarly, the clearance of 180mm works in favour of 500, where we have only 165mm in the NCK. It is better, but still very far away from Afrika Twin where I will remind you the clearance we had at 250mm.

What the manufacturer says about Hondy CB500X, here we have a steel truss frame, in which the rigidity has been optimized, which improves the feel for guidance. And indeed, it is driven sensationally, we have full control over what happens to this machine. A few elements help with this, this already mentioned frame, low weight and 19 inch wheel at the front. The whole thing does a really good job.

You absolutely can't get attached to the gearbox, on the contrary, the gears run very smoothly, this is a pattern for the competition, if it wasn't for safety you could ride it in sneakers, this is how lightly the gearshifting works. We also have an anti-hopping clutch, which will help to master the motorcycle during gear changes and too high revs.

A additionally, the engine is located near the point of the rocker arm axle, which also improves the handling of the motorcycle.

Many times in the field, which you can see on film: "Honda CB500X 2019r test lasted 7 days, what is my opinion, is it worth it and for whom is it a good choice? " I drove on the border of the soil and I think thanks to these elements I managed to avoid it.

CB500X Honda from 2019 is a great motorcycle to start with. If I were to compare it to the competition, it's closest to the Yamaha Tracer 700, but it's a little bit higher thanks to the fun you can have from off-road riding!

They are slightly smaller than the NC750X at the front, we also have a single wave disc with a 2-piston clamp, while the size is 310mm and not 320 as in NCK.

The rear dimensions are the same 240 mm and we have one piston clamp instead of two.

You receive 2 channel ABS as standard. Unfortunately, it cannot be switched off, which would be useful if you want to get off the asphalt and have some fun on the gravel.

You see here cost-cutting, the motorcycle is not a top-shelf position and this control was missing, I did not mind, maybe because of the low power of the Honda CB500X mounting traction control would be an exaggeration? Yes I shoot, let me know what you think in the commentary!

The long 41 mm diameter telescopic fork has adjustable spring preload, as does the rear shock with Pro-Link system. Here, in turn, I do not know what to say before I mentioned the lack of traction control and this would be due to the lower price or power of the motorcycle.

What about the suspension regulation, though? My NC750X does not have this adjustment on the front. Here both this model and another one that I will test the CBR500R has.

New quality in Honda? I expect that the next installment of the Honda NC750X will also get the front suspension adjustable, it would be nice if they pressed still uspide down.

Recurring to the suspension works very well in my opinion, it is great to ride it in light terrain on those cat heads that you could see at the beginning of the movie. And I'll tell you the back with the light jumps, it tries to catapult you.

This is worth adding something about the couch that I didn't say before, you will find a battery underneath it and you can take it off with a key, but you can't attach it so that when you brake harder or some unevenness in the terrain, you won't click something in it.

I've tried several ways and every time you move forward, there's something in that seat.

Mass centralisation - which means that the heavier parts of a motorcycle are placed as close as possible to its centre - makes steering and handling easier. The CB500X is designed according to this concept. Its engine is located close to the rocker arm axle point. 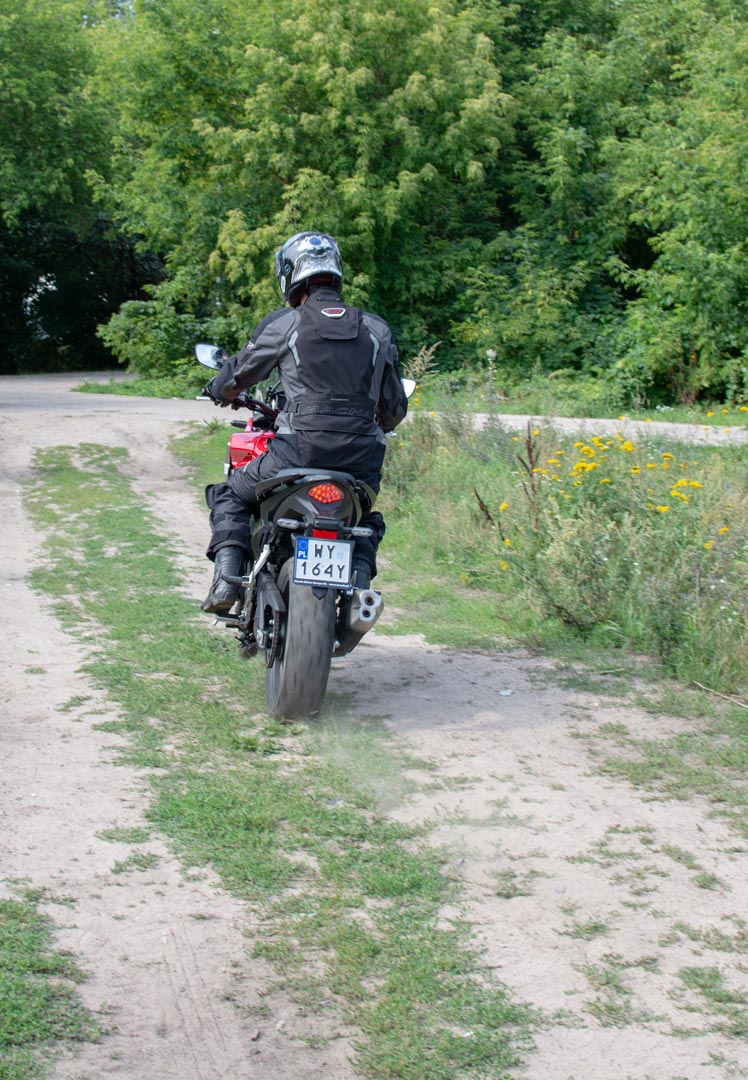 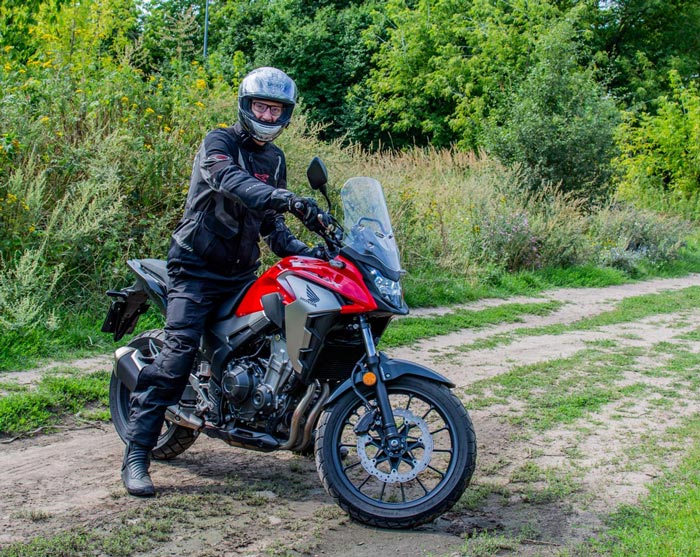 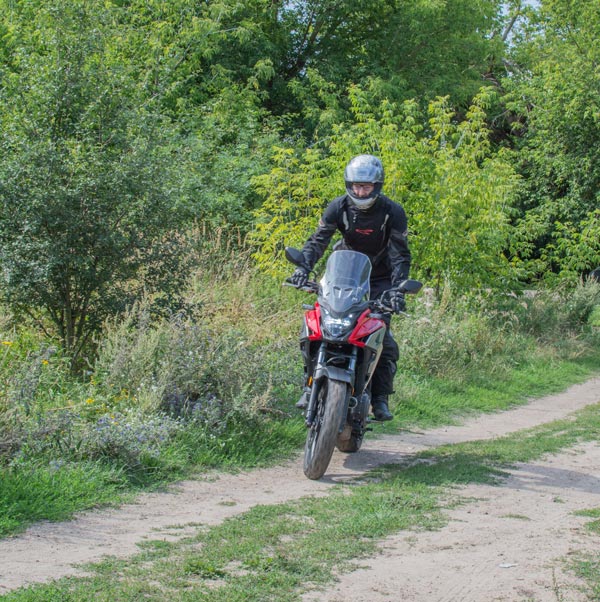 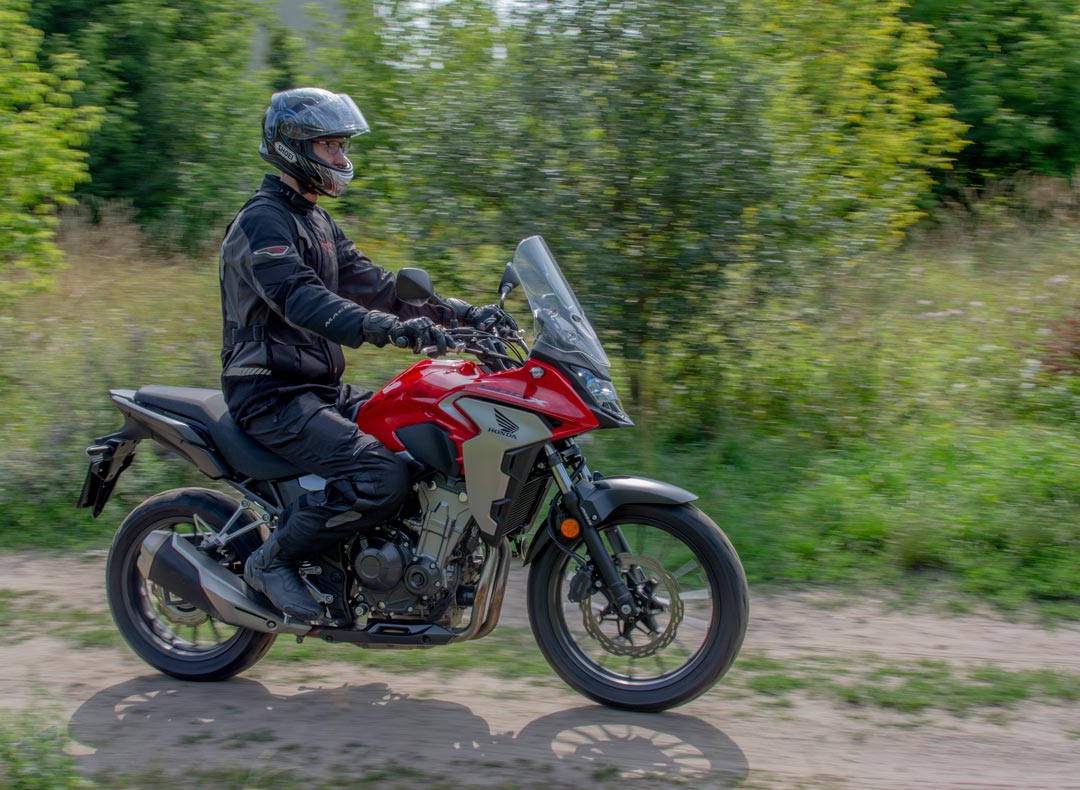 How does the CB500X work in the city?

Motorcycle created also for the city, so I would say quite universal machine. You may not wind thousands of kilometers to ride the route, but it is enough in Poland. To the city as much as possible, you sit high, visibility is very good, through an upright position. You maneuver it like a narrow light bicycle, I would compare it to Tracer 700 with the fact that I put the eyelet higher, because of the possibility of jumping into the field and really great fun you can experience there.

The CB500X is a great choice in traffic jams, the steering wheel is narrow - 825 mm there is no problem with passing the car mirrors.

NC Honda NC and Africa Twin have been tested previously, but I don't think there are any good displays, what does it look like in the third Honda I've been testing?

What can you read on it:

On the right side there is a white vertical stripe that starts to flash to indicate that it is time to put in a higher gear. As far as gears are concerned, I will not tell you all but e.g. a cut-off at 2 is around 80 km/h. Something already tells you how fast you'll be able to get there.

But even though Honda has opted for a new color display they have not escaped previous mistakes like those of Afrika Twin, in full light it is completely illegible. Some kind of matt foil would be useful here, as it is on the screens of some laptops. It is still half poor when the sun is falling directly on it and you can see something there.

And when it falls on your face, you can't see anything because you're starting to bounce in this screen.

What about polarized sunglasses? It's very good here, because the type of display used only takes in the sunlight?

What's the contrast, it's a cool idea because the whole thing is black and what's displayed on it is white. It works well at night, does not tire the eyes.

I'll tell you it's a great choice, just with those less experienced drivers. Starting your adventure with motorcycles you probably can't do better. Similarly, when switching from a smaller capacity, e.g. 125 cc, you should seriously consider choosing the 2019 Honda CB500X.

The maximum torque is 43 Nm at 6500 rpm.  Honda engineers redesigned the camshafts and managed to increase the low and medium range torque. We therefore have a reduced acceleration time. Remember, however, that in order to accelerate to 100 km/h, you will have a little fun with the clutch, because you will have to fasten 3 gears.

This is simply brilliant what the engineers from Honda have achieved. Remember that it's only 500 cc and the sound will surprise you very positively, anyway, listen to how it comes out on my film. I especially like the sound of bubbling during reduction, speed reduction. Undoubtedly it's the best sounding five hundred I've had a chance to hear and even my 750 sounds much weaker.